The Horizontal lines are DF and BC i.e. 2 in number.

The Vertical lines are DG, AH and FI i.e. 3 in number.

Now, we shall count the number of triangles in the figure.

The triangles composed of three components each are DFJ and DFL i.e. 2 in number.

The triangles composed of four components each are ABK, ACK, BFI, CDG, DFB, DFC and BKC i.e. 7 in number.

The triangles composed of six components each are ABH, ACH, ABF, ACD, BFC and CDB i.e. 6 in number.

There is only one triangle i.e. ABC composed of twelve components.

Select the figure that will come next in the following figure series.

Select the option in which Figure-X is embedded. (Rotation is not allowed) 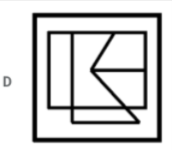 Select the option figure in which the given figure is embedded (rotation is NOT allowed).

Answer & Explanation Answer: B) B

Which of the following cube in the answer figure cannot be made based on the unfolded cube in the question figure?

A can work twice as fast as B. A and C together can work three times as fast as B. if A,B and C complete a job in 30 days working together, in how many days can each of them complete the work.

Select the option that depicts the correct mirror image of the following figure if the mirror is placed at MN.

According to the given Venn diagram, the total number of non-athletic and disciplined boys is ___. 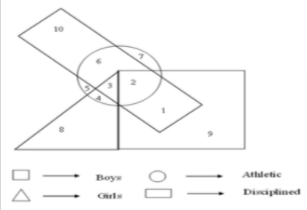