What will be the number at the bottom, if 5 is at the top; the two positions of the dice being as given below:

A dice is numbered from 1 to 6 in different ways.

Choose the box that is similar to the box formed from the given sheet of paper (A).


when a cube is formed by folding the sheet shown in fig. (A), then

Two positions of a block are shown below: When six is at the bottom, what number will be at the top?

A cube has six different symbols drawn over its six faces. The symbols are dot, circle, triangle, square, cross and arrow. Three different positions of the cube are shown in figures X, Y, and Z.

Which symbol is opposite the dot?

As analysed above, the cross lies opposite the dot.

Count the number of cubes in the given figure. 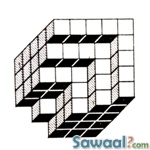 Three different positions X, Y and Z of a dice are shown in the figures given below. Which number lies opposite 6?

As analysed above, 1 lies opposite 6.

Find the total number of cubes in the given figure ?