Answer & Explanation Answer: A) Remove the permissions for the local administrator from the printer.

You recently been promoted to Network Administrator for DLM Shipping. When you took over this position the first thing you notice is this Windows 2000 environment using DNS naming convention, root domain is DIM.COM, with numerous child domains. User accounts are stored in the child domains. However your supervisor informs you that root domain is misspelled and should be DLM.COM. He explains this is causing tremendous problems with the users and customers. He wants you to rename the domain. What will happen if you rename this root domain server?

Answer & Explanation Answer: C) When you rename the root domain server you will lose the entire network orphaning the child domains.

Which hardware platform (or platforms) are supported by Windows 2000?


The Intel Pentium/166MHz (and higher) platform is the only hardwaer platform supported by Windows 2000.

You are the administrator of a SQL Server 2000 computer. The server contains a database named Inventory. The database has a Parts table that has a field named InStock.When parts are shipped, a table named PartsShipped is updated. When parts are received, a table named PartsReceived is updated. The relationship of these tables is shown in the exhibit. (Click the Exhibit button.)

You want the database to update the InStock field automatically. What should you do? 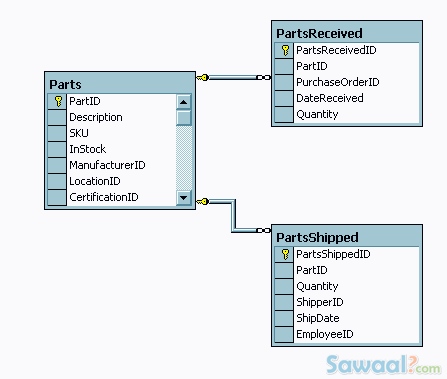 Answer & Explanation Answer: A) Add triggers to the PartsShipped and the PartsReceived tables that update the InStock field in the Parts table.


Triggers are a special class of stored procedure defined to fire automatically when an UPDATE, INSERT, or DELETE statement is issued against a table or view. They are powerful tools that can be used to enforce business rules automatically when data is modified. Triggers can extend the integrity checking logic of SQL Server constraints, defaults, and rules, although constraints and defaults should be used instead whenever they provide all the needed functionality. In this scenario an AFTER UPDATE trigger can be used to update the tables to update the PartsShipped and the PartsReceived tables that update the InStock column in the parts table.

You create a mirrored volume on a Windows 2000 Server computer. What additional item should you create?


A fault tolerance boot disk is a floppy disk that you create that enables you to boot your Windows 2000 computer in the event that the first disk in your computer's mirrored volume fails. This disk contains an edited copy of the Boot.ini file.