The most important small scale industry in india is the

Who will inaugurate the 6th Asia Pacific Ministerial Conference?

Name the continent where 'Tundra' type of climate is not found

Some pins are needles. Some needles are handles. Some handles are locks. Some locks are keys.

I. Some keys are handles

III. Some pins are keys

Answer & Explanation Answer: A) None follows 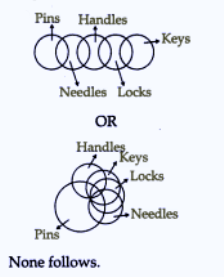 The biggest public sector undertaking in the country is

In this Whatsapp group for General Knowledge, you can get daily updates about gk questions that are asked in all competitive exams like Current Affairs, General Science, General Awareness, Physics, Biology, Chemistry, Computer Science, Sports, Books and Authors, Business Awareness, etc... In addition, you can share and ask your knowledge & questions to get answers with tricks and tips.

G-15 is an economic grouping of


G-15 is an economic grouping of Third World Nations.

The G-15 membership has expanded to 18 countries, but the name has remained unchanged.